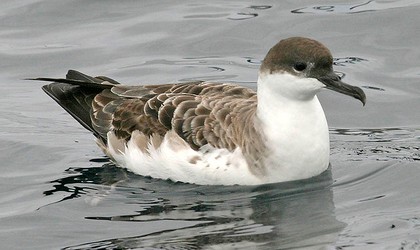 The Great Shearwater (Puffinus gravis) is a large shearwater in the seabird family Procellariidae. Its relationships are unclear. It belongs in the group of large species that could be separated as genus Ardenna (Penhallurick & Wink 2004); within these, it might be allied with the other black-billed, blunt-tailed species Short-tailed Shearwater and especially Sooty Shearwater (Austin 1996, Heidrich et al. 1998). Alternatively (Austin 1996, Austin et al. 2004), it could be a monotypic subgenus (Ardenna sensu stricto), an Atlantic representative of the light-billed Hemipuffinus group (Pink-footed shearwater and Flesh-footed Shearwater).